While Zahara Mkutukana (34) was away for the Easter weekend, intruders got entry in her house and stole her most valuable SAMA trophies.

The six South African Music Award trophies which stood on a Z-shaped stand in her home bar were her pride and joy.

In an interview with Drum Magazine, Zahara said that whoever invaded her home and stole the awards needs to be punished and she wants her trophies back.

“I don’t care even if the person leaves them at my gate. I want those awards back,” she says.

“I left her home on the weekend of Easter and returned on Thursday 21 April,” she says, only to find that her customized stand which holds her engraved and gold-plated awards was empty was bare. “There was no break-in at the house. Everything was exactly where I found it. The thief did not take anything else besides the six SAMAs and I want them back.”

Zahara says her gardener, who has been working for her since she moved into her home 10 years ago, says he found the door slightly opened and he closed it but did not enter the main house.

“He came to do the garden while I was away. He says he saw the door not properly closed and pushed it and closed it. He says he never went into the house, and I don’t see how he could have done so when all doors were locked,” she says.

Next Somizi is engaged! 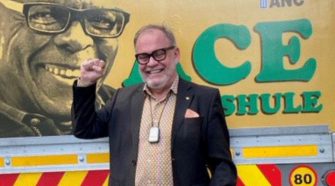