Media personality, Somizi Mhlongo who is currently in the headlines for being blocked by the Zimbabwean government because of his sexuality says his father always knew he was gay.

The former Idols SA judge revealed in an interview that his late father Ndaba Mhlongo actually jumped to the conclusion that he was gay.

Mhlongo stated that his father cried to the fact that his gayness was noticeable.

Somizi himself states that he’s always known he was gay.

“I’ve been in situations whereby I would be with someone who really loves me and understands me but would not be with me because they fear coming out. Many gay people don’t have the guts to say accept me for who I am.”

He’s also admitted that being openly gay has cost him work opportunities. He made this admission on ‘I am’  a programme which was on Vuzu Amp.

He said he was put in a box the minute he came out and no longer got cast for straight roles.

“That’s the reason I refuse to play gay roles even to this day.”

The TV personality was blocked in Zimbabwe, following an invitation by Gava Restaurant for an exhibition cooking event.

He responded to the development and said;

“If it means you not wanting me for me being me, authentically me, keep it. Keep your space. Keep your country,” Mhlongo said.

“I don’t want to be there anyway.”

Singer, Kelly Khumalo is standing in solidarity with her close friend Somizi Mhlongo as she declined to replace him for the Zimbabwe-based gig.

This was after Zimbabwean churches and political party Zanu-PF allegedly sent a letter to the president’s office blocking Somizi.

The Empini hitmaker was meant to replace Somizi at the reopening of the restaurant in Harare.

‘He didn’t want to see me on top,’ Somizi calls out mohale Mohale 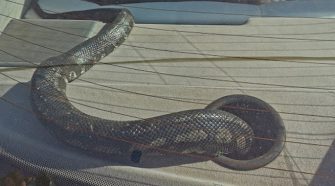 “The Snakes Are My Kids,” Evaton Mall Snake Owner Speaks Out