Generations ‘Sthandiwe’ has opened up about testing positive for Covid-19

Taxi driver shot dead on N11 near Modelkloof in KZN

Thulas Nxesi in hot water after one person was paid R5.7m in UIF funds

South Africans must wait even longer for level 3 rules

The vigilance of Olifantshoek VisPol members led to the arrest of six male suspects aged between 25 and 35 years.

It is alleged that on yesterday, the members were conducting patrols duties as part of enforcing the Covid-19 regulations when they stopped a vehicle with a trailer. The occupants did not have permits and upon searching the trailer, four sheep were found tied with ropes. The occupants could not give a reasonable explanation of where they got the sheep.

A preliminary investigation revealed that the sheep were stolen in Upington.

All six were arrested and are expected to appear Court soon. Police investigation continues.

Previous 80-year-old accused of being a 'witch' set alight

Next Home Affairs suspends some services under level 3

80-year-old accused of being a ‘witch’ set alight 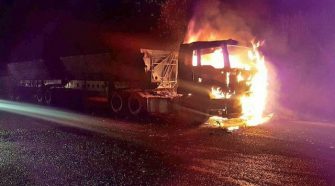