Uganda goes to the polls

Can we expect stricter Covid-19 regulations after NCCC meeting?

Pastor Essa Ogorry who refused to wed a couple because they came late, dies

In February of this year, the South African Satanic Church became the first of its kind in the country, with the church opening its doors in Century City.

Getting to that point was a four-year-long journey for co-founders Adri Norton and Riaan Swiegelaar (pictured below), and they say interest is high, with more than 300 new applicants for membership in June alone. Let’s start with the IOL report from a few weeks back: The church is a registered non-profit company under the category of a religious organisation.

Co-founders Adri Norton and Riaan Swiegelaar said they would like to dispel some of the misconceptions people may have about Satanism. We are not a get-rich organisation but rather a religious organisation,” said Norton. Swiegelaar said they did not sacrifice humans or animals, there were no initiation ceremonies, they did not worship a devil or even acknowledge a devil – Satan is an archetype.

Swiegelaar added that they were not after your children nor were they part of the “Illuminati” or a cult. In fact, members who wish to join must be at least 18 years old, and be approved by the seven-member council.

According to the South African Satanic Church, there are nine central Satanic Statements, written by Anton LaVey in ‘The Satanic Bible’ (pictured above), the first of which is “Satan represents indulgence, instead of abstinence”.

Number five is “Satan represents vengeance, instead of turning the other cheek”, and finishing with number nine, “Satan has been the best friend the church has ever had, as he kept it in business all these years”.

The always entertaining Daily Voice also compiled a report on the Church, outlining their stance on the difference between Satanism and devil worship:

“The council comes together and we review the applications and we ask, is this person really a Satanist? Or they are devil worshippers,” Adri explains. A devil worshipper will use the words, ‘Satan the lord, I love Satan, I need to worship Satan’.

Previous Next of kin sought by St Faiths SAPS 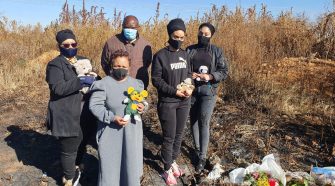