Springbok rugby captain and global ambassador for the United Nations Spotlight Initiative, Siya Kolisi together with his wife Rachel Kolisi are the Executive Producers of a new short film entitled #WeAreDyingHere.

Springbok rugby captain and global ambassador for the United Nations Spotlight Initiative, Siya Kolisi together with his wife Rachel Kolisi are the Executive Producers of a new short film entitled #WeAreDyingHere.

“One of the most beautiful results of this film is that it causes people to stop, think and more so encourages men and women to have conversations. Like the title, it gets straight to the point” explained Rachel. “There are many things that need to be unpacked in this film, and there is a lot that can be explained” Siya added. “The narrative of the film also teaches you that Gender-Based Violence doesn’t start with the violence, but the whole thought process; the film encompasses a lot of educational learnings for us as men.”

Produced by Bianca Schmitz of Optical Films and Siphokazi Jonas of Wrestling Dawn Arts, in association with the Kolisi Foundation, #WeAreDyingHere chronicles the journey of three soldiers forced to survive a war that they did not choose.

In this war against women’s bodies, they attempt to find solace by telling their stories under the constant watch of a relentless enemy.

#WeAreDyingHere is an intimate reflection on the impact of violence, harassment, abuse, rape and femicide on everyday life. While the film never depicts any violence, the psychological and emotional trauma on these soldiers is evident.

It is a necessary insight into the experience of living in South Africa where names of missing or murdered women trend frequently.

Next Masechaba Ndlovu is now a qualified sangoma 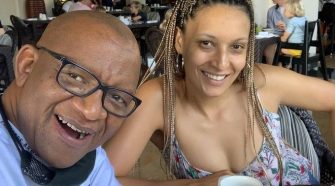