Boity is grateful to her ancestors

Cassper heart broken As Mzwandile Returns To The Streets

The call by the Basic Department of Education for pupils not to associate the end of their examinations with parties has fallen on deaf ears.

This is because many pupils still believe that drinking alcohol and smoking dagga and cigarettes is the best way to have fun and celebrate pens down.

Pictures of Maputle Secondary School matriculants having fun with bottles of alcohol including gin surfaced on social media.

The pictures clearly show both girls and boys from the same school at GaMaroga outside Burgersfort, Limpopo, enjoying booze and dagga.

Many social media users on Facebook were left shocked.

We can see you are happy but what you are doing is totally wrong.”

Vi Vi An said: “But you are not yet done with your examinations.”

Terence Kay said: “This is indeed shocking. I thought you guys learnt from the pens down celebration accidents we witness on television every year.”

Department spokeswoman Tidimalo Chuene said the department does not condone such shocking behaviour by the pupils.

“We discourage this kind of celebration because the disadvantages are appalling,” said Chuene.

She said the worst thing is that this kind of behaviour is being done without supervision.

“It is unfortunate that many are underage and some end up being raped, kidnapped or being killed,” she said.

“People should know that Covid-19 is still with us and it is a pity that drinking alcohol makes our people forget about it,” she said.

Next Sindi Dlathu to become co-executive producer on the #TheRiver1Magic 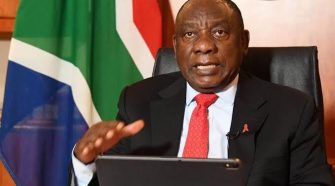