The Department of Social Development in Gauteng has confirmed the births of the decuplets on Wednesday afternoon, but later said it would only be able to give details on the exact number of babies after it visited the mother on Thursday.

Department spokesperson, Feziwe Ndwayana, said the mother and her babies have been moved to a place of safety.

She said the Department of Social Development has been delighted to learn about the mother who gave birth to 10 babies, especially because this happened right after the conclusion of annual child protection week.

“As the department we confirm that the mother has been a client of ours since 2016. However, due to an agreement with the family, the mother and her babies are in a place of safety to give her time to bond with the children and for her body to heal,” Ndwayana said.

She added that the department is currently assessing her needs and when she and her family are ready, the MEC Morakane Mosupyoe will meet the family to congratulate the mother and handover any necessity that may assist her with her babies.

The couple last night received a donation of R1 million from Survé Philanthropies. The monies will be divided over a period of time.

Tebogo Tsotetsi, the father of the decuplets said the world will see his children when the time is right. The family has asked for privacy.

Earlier this week, Pretoria News broke the news of Gosiame Thamara Sithole giving birth to the babies, dubbed the Tembisa 10. According to reports, the babies were born via C-section at a hospital in Pretoria.

“I am still shocked, excited and I feel blessed and I feel overwhelmed by the support that I am getting,” he said.

Recalling his emotions when he heard about his babies’ births, Tsotetsi said he cried as he walked around his house alone.

He added that the babies were still very small and assured the country that they do exist.

“It is a very unique situation. They are premature, they are still incubated. Very small as you can think – 10 children in one womb that normally carries one baby,” he said.

News of the birth caused a sensation and was carried by news outlets in SA and around the world.

Previous Why Jessica is trending Number one on Twitter

Chinese Boss Gets A Whipping 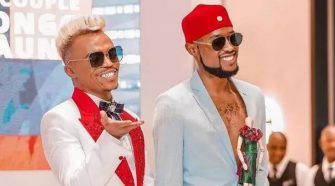 Somizi: I Am Not Afraid Of Losing Anyone