Official and an inmate were caught on camer - Taxi Times

The four minute long clip shows the pair first locking a cell door, going casual with the usual starters before the prisoner removed the prison guard’s trousers and his own for full bedroom action.

When they finish their business, the prisoner uses tissue paper to clean the warden before cleaning himself.

It appears the prisoner recorded the act and the officer did not know about it.

The female guard has not been named though authorities indicated that “they have also seen the clip and they are now investigating.”

Spokesperson for the department Singabakho Nxumalo said a video with flustering scenes of alleged sexual activity between an official and an inmate at the Ncome Correctional Centrehas left the department appalled, embarrassed and gutted.

“Sexual activities between inmates and correctional officials are shameful incidents that can never be ascribed to what is expected of our officials,” said Nxumalo.

“A video with flustering scenes of alleged sexual activity between an official and an inmate at the Ncome Correctional Centre, KZN, has left the Department of Correctional Services (DCS) appalled, embarrassed and gutted…” says a statement.

Meanwhile, prison bosses have asked people not to share the video. The Department has appealed to those in possession of the video to stop sharing it. 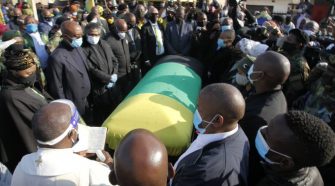 ANC accused of ‘ignoring own laws’ at funeral