Miss Universe Zozibini Tunzi is home in Mzansi. The beauty queen and reigning Miss Universe posted photos of herself at her home in Tsolo in the Eastern Cape.

Her caption read , “Even if for a very short while, being home will always be the restoration of the soul. After so long we are now currently navigating on tears of joy, love, warmth, support and song??Kuhle eMatolweni!”

In her photos, she is nearly unrecognisable wearing a doek, flip flops and an apron attending top three large pots in the outside cooking area called “iziko”in IsiXhosa, a common way of cooking in villages particularly when there is a special occasion in the family home.

In the second photo she is standing by the door of a rondavel with a little boy looking at her.
In another photo there is a plate of ulusu or tripe,a favourite in many Xhosa homes.
In February while visiting Mthatha, Zozi told media that she could not wait to eat her mom’s umngqusho (samp).

Zozi,as she is affectionately known, has been living in New York since being crowned Miss Universe last December.
She was last home in February as part of her week-long Homecoming tour across Mzansi.
Zozi was scheduled to return to Mzansi again in April as part of a campaign with Woolworths.

But the Covid-19 pandemic and Mzansi implementing its own lockdown in late March banning international travel except for repatriation flights meant she was stuck in the United States.
Before entering Miss South Africa for a second time, Zozi was a PR student based in Cape Town having been raised in the Eastern Cape.

Next Serious trouble in the Kingdom – Prophet Bushiri VS Prophet Mboro 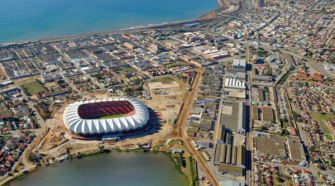