Joy for Clicks as High Court rules in their favour, this is what will happen - Taxi Times

The Economic Freedom Fighters’ (EFF’s) planned week-long shutdown of Clicks stores around the country has been put to the sword by the High Court in Pretoria.
Acting Judge Norman Manoim has interdicted the party – along with those “acting in concert with it or pursuant to instructions from it”- from inciting violence against the retailer’s “ordinary commercial operations”.
He also barred the party and its supporters from intimidating Clicks customers and staff.

Manoim issued the interdict on Tuesday morning, in response to a second urgent application brought by the retailer on Monday night after its first one was dismissed on a legal technicality on Monday morning.

The EFF has waged war on Clicks over an advert for a hair care product by Unilever’s TRESemmé that surfaced on its website last week. The advert included images of a black women’s hair accompanied by the words “dry, damaged” and “frizzy and dull” next to images of white women’s hair and the words “fine and flat” and “normal”.

Both Unilever and the retailer have since apologised and the advert has since been removed.
But despite a lawyer’s letter from Clicks’ legal team at Werksmans, the EFF on Monday pressed ahead with its plans to shut down stores across the country for a week calling for heads to roll and for those responsible for the advert to be fired.

Some stores were petrol-bombed and vandalised during the course of Monday’s unrest and a number were unable to trade the entire day. Several people were arrested around the country – including five in connection with vandalism at the Clicks at the Lemon Tree shopping mall in Alberton, where doors and windows were smashed and a fire was started.

The interdict handed down on Tuesday morning will remain in effect until the case returns to court later this month, for finalisation.

The EFF in a statement on Tuesday noted the interdict but denied having “engaged in or commissioned any violence against employees, customers or commercial operations of Clicks”.

“All members of the EFF have under our instruction engaged in disciplined protests, engaging prospective customers of Clicks on the racism perpetuated and engaging workers on the conditions they face while working for Clicks,” the party said.

Previous Julius Malema: Fire the people that are responsible for advert 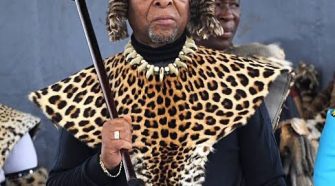 His Majesty King Goodwill Zwelithini Ka Bhekuzulu has passed away