Drinking alcohol can make the coronavirus worse, the WHO says in recommending restricting access

Petrol attendant airlifted to hospital after being shot in Centurion robbery

A Holy war has erupted at the Zuurbekom IPHC Church, in the West of Joburg.

Information received from an officer who refused to be named stated that seventeen suspects were arrested and 16 shotguns plus seven handguns were seized.

“An ambulance is waiting to be escortded inside the Church premises after some church members were found injured,” said the officer. He added that the National Intervention team made their way to penetrate inside of the Church to search for more suspects in hiding and doing hitman work.

SAPS spokesman Captain Kay Makhubele told Dailysun that the situation was very tense because the shooting is continuing.

This is a developing story…

Next 22-year-old University student, Winile Mazibuko found in a bush raped and killed 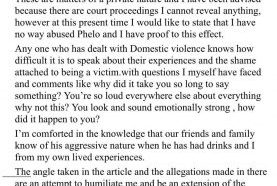