A 27-year old Gauteng mom is fighting for her life in ICU after her car was set alight outside a preschool in Benoni on Monday.

The woman had just dropped off her child at the school when a man, believed to be her boyfriend approached her car and a struggle ensued. He began pouring petrol over the car and himself and the car was set alight.

In an attempt to stop him the woman was set alight as well. Another woman, who was in the passenger’s side of the car had also sustained burn wounds and was rushed to the hospital as well.

Police are said to be investigating an attempted murder case following the incident.

Colonel Noxolo Kweza said the incident appears to be an apparent domestic dispute and the 40-year old suspect who is also in a critical condition in hospital is under police guard.

According to the preschool owner, the child was already inside the school when the incident occurred.

In May, independent UN experts said South Africa’s failure to address domestic violence is a violation of women’s rights. The report cited low levels of prosecution and conviction rates and found that those women who reported their abusers did not get the protection they needed.

Official figures show that out of nearly 144,000 requests for protection orders in 2018-2019, only around 22,200 were granted.  In many cases, the protection order just called for the abuser to sleep in a different room, in the same house. 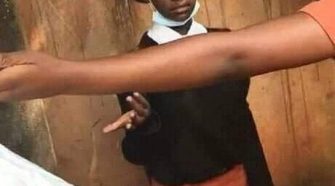