Selling eggs from his bicycle

Prophet Bushiri and his wife Mary are allegedly in SA illegally

Withdraw your Impuphu at the ATM

A tribute fit for a king.

That’s what will get under way in Nongoma this morning, when mourners gather to pay their respects to the Zulu nation’s longest-serving monarch.

King Goodwill Zwelithini was laid to rest last night in a private and intimate ceremony attended only by a select few men and his amabutho, or warriors.
The nation will again bow its head to honour the late monarch when his official memorial service begins at 10 this morning.

King Zwelithini died on Friday at the age of 72.

He was admitted to hospital over a month ago for treatment for several unstable glucose level readings.

Eskom has announced that it will suspend load shedding between 10 am and 2 pm today to allow the nation to participate in the official memorial service for King Goodwill Zwelithini.

Next Owner of Raw Pleasure Condoms

Man who knew he had Covid-19 but kept going to work was rightfully dismissed, says court 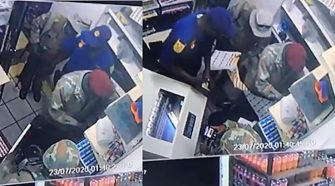