Either the person who complied Nelli Tembe’s slide show tribute is shady as hell for adding DJ Zinhle or this is a sign that the popular DJ is AKA’s soul mate.

I mean how else do you explain it! Okay, let’s start right from the beginning…Almost a week after her tragic passing,  Nelli is being laid to rest on Friday 16 April. A video or slide show in memory of her was played during the funeral proceeding and what a collection of good pics it was.

But then something unexpected happens, as everyone was still starring at the screen, BOOM there goes DJ Zinhle’s pic. Well, most of us thought our eyes were playing games with us but going back to the Twitter timelines it turns out, the sh*t is so real.

Next Taxi driver accused of killing infant to apply for bail 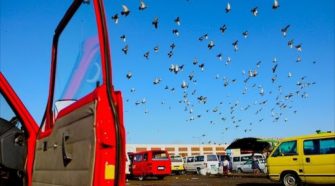