Executive Mayor of the City of Johannesburg, Geoff Makhubo, has died. According to reports, he succumbed to COVID-19.

Makhubo tested positive for the virus in June. He immediately self-isolated but was admitted to the hospital a week ago.

“He will remain in hospital until his medical team is satisfied that he is fully recovered and can resume his public duties,” spokesperson Mlimandlela Ndamase said at the time.

Makhubo’s office also urged the public to adhere to all safety measures.

“Gauteng and indeed Johannesburg are officially in a third wave and residents are urged to take the necessary non-medical precautions seriously and to ensure they wear masks, maintain social distance and limit movement in compliance with the level-3 regulations currently in place.”

South Africa has since been placed on a level 4 lockdown.

Former major of Johannesburg, Herman Mashaba, says he is saddened by the news of Makhubo’s death.

“Shocked to hear of the passing of Johannesburg Mayor, Geoff Makhubo. In these difficult times, we are reminded of how fragile life can be. Our shared humanity will always come before our politics. My thoughts and prayers go to his family, friends, and colleagues in the @MYANC,” he tweeted.

Next SAPS arrest 62 for Gauteng and KZN riots

Jub Jub on COVID-19: “I had the most devastating experience of my life”

Steve Kekana to be laid to rest on Thursday in Polokwane 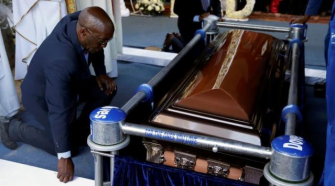