Clicks store in Witbank ‘petrol bombed’.  Following the Clicks ‘racist’ ad which has caused outcries across South Africa, one of the country’s opposition parties Economic Freedom Fighters (EFF) has expressed their anger and has taken to the ground to protest against such acts. This is after they slapped the Clicks Group with a list of demands they wanted to be met…or else.

Among the demands, Clicks must immediately terminate the contracted company which commissioned the advert.

Here are the EFF’s demands:

We demand that the above must be executed within the next 24 hours and confirmation be put in writing.

“Should you not meet our demands above, we will close all Clicks stores in South Africa without any further notice. We urge you to take this letter seriously, as it is our last and final communication with your organization until our demands are met,” said the party.

Therefore as they vowed, the EFF members have gone to different Clicks stores across the country, and apparently, the store in Witbank has been petrol bombed.

Joy for Clicks as High Court rules in their favour, this is what will happen 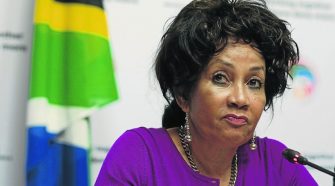