A video of Moja Love’s Bishop Makamu presumably asking for sex from a congregant has surfaced on social media, and has left many shocked to hear the Pastor speaking to an unidentified women on a call.

The clip posted on social media starts with the Pastor saying he had dropped someone off, and asks the lady on the call if she was available for him to see her.

He then proceeded to ask if anyone is at the house, and whether anyone will see him when he gets there, to which she replies ‘no’.

This is then followed by the Pastor asking, ‘otlo mfa akere’, which means ‘will you give it to me’, this is followed by him pleading with her.

The lady then says ‘no daddy’, ‘we had spoken about Sunday though’.

Makamu then giggles and says ‘Wabora’, which translates to “you are boring.”

Bishop Makamu is the host of Rea Tsotella on Moja Love, a confrontational show that looks at conflict resolution with a focus on family and romantic relationships, and the issues that plague them.

Earlier today Moja Love sent out a press statement saying he has chosen to voluntarily step down.

The channel has said that they will be conducting an internal investigation on the matter, and only until it is complete will he be reinstated.

Previous Bishop I Makamu voluntarily steps down from Moja LOVE

Next Black Coffee switches Enhle off!

Bishop Israel #Makamu offered his side of the story on Moja Love TV’s #AmaBishop. 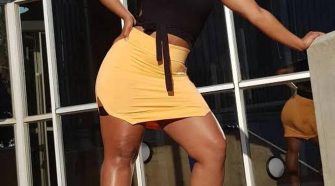