Can we expect stricter Covid-19 regulations after NCCC meeting?

John Vuli Gate”, an amapiano song by Limpopo group Mapara A Jazz, featuring Ntosh Gaz and Colano, became the talk of the town after a video clip of a group of young women dancing to it went viral. Former “Isidingo” actress Makgotso Monyemokathoe, know as Makgotso M, was mistaken for one of the dancers.

Although the original video with Mzansi’s new dance challenge was first spotted on TikTok, where a group of guys was seen walking out of a minibus taxi at a filling station while dancing to “John Vuli Gate”, it was the women who propeResponding to a social media post alluding that she resembles one of the lead dancers in the hit song, the “Is’thunzi” actress admitted that even her mother thought she was in the video.

The post with Makgotso and the young woman’s photograph, side by side, the caption read: “In case you were wondering about her career. She is more than just stocko (dancer), she is also an established actress.”lled the song to popularity With the song taking over social media, fans also started to be curious about the five Mpumalanga women.

To which Makgotso replied: “Haibo guys! My friend just sent me this. Do you want to know a joke? My mom saw the video and thought it was me. I was soooooo confused, my own mother! She added: “I was like how? She was like, those are your legs. Anyway, it’s a compliment, she kills it and she’s hot 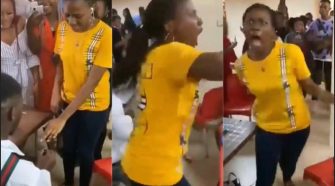