Mama Joy joins Royal AM, a new team in the DSTV Premiership – a team that was formed after Durban business-woman and socialite Shaun Mkhize bought out Bloemfontein Celtic at the beginning of the season.

Mama Joy made the shocking revelation on Thursday, 25 November detailing how she became sympathetic towards Royal AM owner Shauwn “Mamkhize” Mkhize after suffering “bad treatment” before buying a top-flight status at the beginning of the season.

“Dear South Africans, I am here today to tell you that I’m leaving Orlando Pirates, hard as it is, I’m going to Royal AM,” said Chauke in an interview with Newzroom Afrika.

“So, from today, no Buccaneer but ‘Her Majesty’, I am Royal.”

“I decided to join Royal AM for me to support MaMkhize. You know MaMkhize, you remember the last time when she was in GladAfrica Championship and she wanted to come to the PSL… On the last day, they said, ‘no, Sekhukhune have qualified and you are going to the play-offs’.

“It was hard for me as a woman to see another woman suffer because you can see how she does things,” continued Chauke.

“MaMkhize loves football. It pained me to see her being hurt like that. At the end of the day, she managed to buy Bloemfontein Celtic.

“And I was surprised, and I said to myself, ‘MaMkhize really wanted to play in the PSL’, and she did exactly that,” she added.

In the video she also revealed details as to how her longstanding relationship with the Buccaneers began.

Mama Joy missed just a single home game in 20 years, and that was in 2012 when she had a family bereavement.

Next Could Kelly Khumalo face charges in the Senzo Meyiwa case? 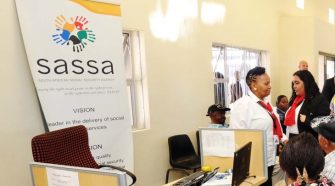 Sassa on first payment of Social Relief of Distress Grant