South Africans no longer required to wear face masks. Limits on gatherings have also been dropped. Health Minister Joe Phaahla has published these changes in the government gazette.

Health minister Joe Phaahla repealed the relevant regulations with a simple notice in the Government Gazette, the import of which was not immediately evident because of the technical nature of the notice.

Phaahla is due to join the minister in the Presidency, Mondli Gungubele, for a press briefing on Thursday, about cabinet deliberations after the health department advised that Covid-19 restrictions should be dropped.

They were expected to announce that President Cyril Ramaphosa and his cabinet had signed off on ending the last major restrictions relating to Covid-19, first imposed during what was expected to be a lockdown of three weeks.

The mask mandate and other restrictions had originally been imposed under the authority of a national state of disaster. When that was discontinued, the same rules were imposed under the power granted to the health minister to deal with notifiable medical conditions.

By repealing three sections of those regulations, “in their entirety”, Phaahla with immediate effect ended those obligations. 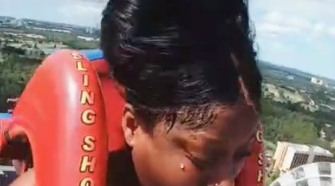 Girl passes out on theme park ride and loses her wig