It seems like new-age self-proclaimed prophets across the world, but in Africa in particular, are always coming up with novel ways to “cure” and “heal” the afflicted as they minister to their congregants.

The prophets seem to be in a constant battle to do the most outrageous things so that they can attract huge numbers to their churches and Zimbabwe clergyman, Prophet T Freddy is the latest to join the trend.

The founder of the Goodness and Mercy Ministries is trending after he made a woman poop on stage during a healing service. During the rather undignified healing process, the Prophet can be heard shouting “come out, come out.”

After the woman has the bowel movement on stage, congregants can be seen clapping sheepishly, while Prophet T Freddy declares that they have just witnessed the “power of God.”

The video of the healing was shared on the church’s social media platforms. The video is now going viral after being shared widely.

However, people do not seem to be too impressed with Prophet T Freddy’s means of healing. Some called out religious leaders to consider their congregants’ dignity when performing their “healing miracles.”

Some called for the authorities to regulate churches and for some to be banned. Others mocked the so-called miraculous healing and accused prophets of exploiting the gullible and the desperate.

Below are some of the reactions from social media,

Popular Prophet Gives Strong Warning That “This December, Something Will Fall From The Sky” 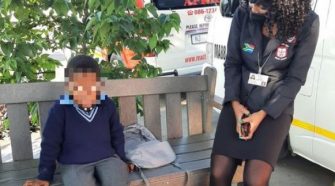 Taxi driver dumps schoolboy (5) at roadside for not having fare