At least one person was shot and killed while 15 others were arrested.  Kagiso the Mogale City Executive Mayor Councillor Tyrone Gray explained that the community originally organised a peaceful protest; however, once the community tried to engage with the zama zamas, they retaliated.

“Community members went to the zama zama camp in Soul City, which is also colloquially referred to as Gold City, and the zama zamas fired at the community. The community then took matters into their own hands.”

Dozens of suspected illegal miners have been arrested in Krugersdorp over the past few days, following the gang rape of eight women at a mine dump last week.

Gauteng police spokesperson Noxolo Kweza says they discovered the body of the man in an open field.

“Police have dispatched the necessary crime scene management team to the scene of crime. The motive and cause of death will form part of the investigation.

“Currently, police are monitoring the protests together with local police and public order members.” 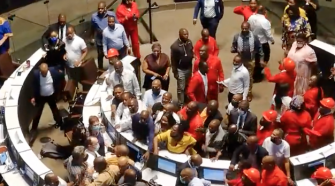