The five teachers’ unions of South Africa have expressed their reservations over minister Motshekga’s decision to address the nation on Thursday.  She is expected to outline her department’s preparations for the reopening of schools.

”We wish to state that for the minister to address the nation before addressing all the areas that are still not compliant will further erode the confidence in the public education system,” said the Unions in a joint statement on Tuesday when reporting back to members on a meeting with Motshekga on Monday over the state of readiness to reopen schools.

Motshekga, the minister of Basic Education, is set to provide fine dates for the phased reopening of schools, as well as detailed plans on how the department plans to handle the reopening.

The unions – Natu, Naptosa, PEU, Sadtu and SAOU – feels that the manner in which the department is conducting itself on the consultations “is causing a trust deficit with the unions and this must be addressed”.

“The DBE [department of basic education] must desist from misleading the public about unions having agreed on everything.”

The unions were informed that only Gauteng and Western Cape schools would be ready to reopen.

“The unions emphatically told the minister that even the two provinces claiming to be ready were not ready if they were going to use the school management teams (SMTs) as screeners.”

According to the unions the meeting agreed to use the whole of the week to allow the provinces to comply with the non-negotiables.

“We agreed that schools must be having the essentials, such as PPE [personal protective equipment], sanitisers and education support personnel to help the SMTs to prepare to receive the teachers.”  The agreement was that the teams would report on Monday, provided that all safety precautions had been met, but the unions said that the provision of emergency water and proper ablution was behind schedule and therefore not in compliance with Covid-19 regulations. “The reason advanced was that it was one week’s work,” they said.

Previous From stuck in window to stuck in jail

Next SAPO and SAA now on the same path 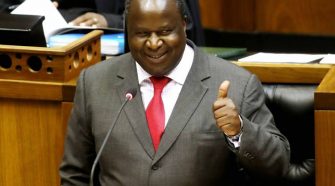