A man, identified as Bolaniran Orimolade, alias Bola Bebo, has been arrested for infecting his wife, stepdaughter, and 12 other women with HIV.

According to Ebenezer Omejalile, the Chief Operating Officer of Advocates for Children and Vulnerable Peoples Network, the suspect, who is a self-acclaimed chairman of the Iyana Iba motor part, deliberately has indiscriminate sex, fully aware of his status.

He is said to have boasted that he is above the law and he will continue to infect as many girls so far as he is alive.

“He does it with so much impunity without any form of remorse, he was arrested several times but buys his way out and goes after his victims and makes life a living hell for them,” he said.

His latest atrocity was on his wife, Mrs Bolaniran, who after infecting her with HIV, he domestically abused.

He is also charged for sexually molesting his stepdaughter who is now living with HIV.

According to Mrs Bolaniran, who made the complaint to the police, she was fed up for the humiliation her husband subjected her and her children to

Despite seeking refuge in a church, she told the police that her husband constantly visits to cause trouble which led him to a 10-year jail term.

The Gender Advocate noted that Bola Bebo has been arrested and transferred to the Gender Anti-human trafficking unit of the State Criminal Investigation and Intelligent Department, Panti, following his arrest.

Also, the National Union of Road Transport Workers has disowned Bola Bebo, stating that he was never a registered member of the union.

A severe and more contagious HIV variant discovered in the Netherlands 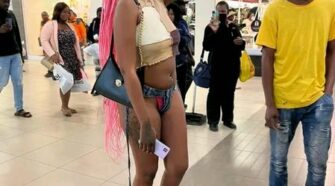 LOOK: Woman has all eyes on her – Walking around the mall with unique outfit