The grade 12 pupils from Ginyani High were renting a house in Ngwangwane Village in Dr Nkosazana Dlamini-Zuma Local Municipality.

It’s believed a man in his 20s, who hailed from the same area, hacked them to death at the property on Sunday.

One matric pupil’s body was found in the house, while the other girl was discovered some five kilometres away from the scene.

Police have arrested a suspect who has already made his first appearance in court.

“A few of them gathered at the court and they were trying to take the law into their own hands,” says Ward 8 councillor Mthobisi Dlamini.

“We, as leaders had to go and disperse them because we could see they might do something. The police couldn’t do their work because they were disturbed.”

He says crime levels have been increasing in the area.

“There are shootings at night. There are a lot of learners that are attacked because that high school attracts learners from different areas, so if they go home late they are robbed of their cell phones.”

The learners from Ginyani High School were brutally murdered while in their rented house in Ngwangwane. pic.twitter.com/eQL9kFslJq 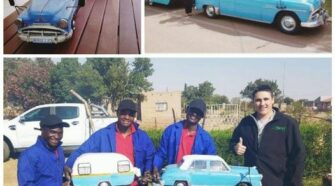