Several roads leading into Kagiso, west of Johannesburg, have been blocked off this morning due to a community protest against illegal mining in the area.

The blockage follows the gang rape of eight women, who were part of a production crew, shooting a music video. They were working on site when the attack took place on Thursday last week, near a mine dump in Krugersdorp. 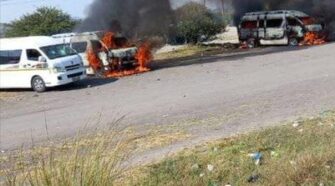