A 14-year-old girl who was allegedly defiled by a farmer at Anamenanpa in Akwapim South is said to have contracted Human Immunodeficiency Virus (HIV).

Speaking to Adom News, aunt of the victim, Janet Boadu said her niece was diagnosed of the dreadful disease a few weeks after the incident.

The culprit, Opanyin Kwame Otopa, 75, is reported to have committed the act on his farm a month ago after he invited the victim and two other young men to assist him on his farm.

Opanin Otopa, upon reaching the farm then sent the two young men to get food from town, leaving the girl behind.

After their departure, he is said to have wrapped the victim’s mouth with a piece of cloth and had multiple sex with her.

He then assisted her home but threatened to kill her should she tell anyone about what happened in the bush.

But her aunty, who narrated the incident in an interview with Adom News, said the 14-year-old returned home and complained of severe pains.

She used hot water on the victim to help subdue the pain and took her to the hospital when the condition persisted.

So after a clinical examination, it was confirmed that the girl has been defiled. It also came to light that the victim has contracted HIV and if not treated, it will lead to AIDS (acquired immunodeficiency syndrome).

Meanwhile, the suspect is currently at the Nsawam Police station to assist with investigations.

Next Government urged to vaccinate teachers

Man arrested for intentionally infecting his wife, stepdaughter, 12 others with HIV 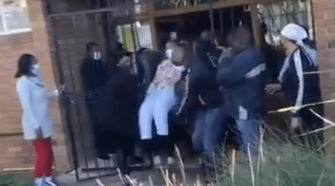