The National Commissioner of the South African Police Service, General Khehla John Sitole has, in the strongest possible terms, condemned the senseless killing of a 33-year-old Constable in Sandton last night.

On Thursday evening at approximately 22:00, Constable Percy Ramalepe together with a colleague attended to a complaint of domestic violence in Hluhluwe Street in Sandton where they found the suspect, a 60-year-old man, in the driveway of his home.

When approached, the suspect who appeared to be relatively calm, opened the gate to his home for the crew to enter where they also found the complainant being the suspect’s wife.

Once inside, the suspect without warning produced a shotgun and shot constable Ramalepe. The crew member quickly grabbed the suspect’s wife, took cover and called for back-up. While awaiting back-up, a second gunshot was heard and moments later the crew member went back inside the yard to investigate. Constable Ramalepe was found lying on ground and the body of the suspect, who is believed to have turned the gun on himself, was found lying inside the house with the late member’s pistol. Both were declared dead at the scene of crime.

The National Commissioner has conveyed his condolences to the family, friends and colleagues of the deceased.

“I am deeply saddened by the news of the killing of this young member in the line of duty especially at a time when the country is faced by the devastating COVID-19 pandemic”, said General Sitole.

“I have directed the Province of Gauteng to provide the necessary support to the family and colleagues”, added General Sitole.

“Furthermore, I also urge all citizens in SA who are victims of GBV or know someone who is a victim of GBV to contact governments Gender-Based Violence Command Centre hotline which operates 24hrs/7 days a week on – 0800 428 428”, concluded General Sitole.

Victims may also contact the SAPS Crime Stop Number on 0860010111 or download the MySaps app and provide an anonymous tip-off about any criminality especially during the lockdown period where people ought to be behind closed doors.

Next Indulging in fish can boost immune system 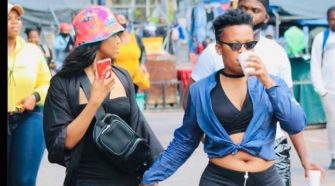