Amapiano vocalist Sir Tril’s manager has spoken out after the star was accused of being around “underage girls” in a viral video shared to Twitter on Monday 11 October.

Sir Trill came under fire on Twitter after a video of him with girls that looked “underage” in a hotel room went viral on Twitter. In the video, the amapiano star is sitting on a bed busy with his cellphone while two girls are seen sitting next to him.

“Sir Trill the girls look underage though,” the video was captioned.

This led to Tweeps slamming the Washa hitmaker for chilling with “underage” girls.

Can we have a footage of him dragging them to that hotel? If there isn’t ain’t then we ain’t got nothing to talk about.

Another video was also shared to Twitter. The caption of the video alleged that Sir Trill “took advantage” of the girls.

Sir Trill’s manager Given Maseko has since spoken out to clear up the confusion surrounding the video. He explained that they were shooting a music video and the clip was taken by a starstruck fan who posted it on her WhatsApp status. It was thereafter shared on Twitter and Facebook.

“We were filming a music video and one of the girls got excited to see Sir Trill and recorded the video.  She posted it on her WhatsApp status and I guess it was taken from her status and posted on Twitter and Facebook,” he said.

“We did not even bother to comment or try to correct anything because we knew there was nothing behind the video. However, the problem was how it was posted,” he continued.

He went on to say that Sir Trill was keeping to himself in the video.

“The person claimed those girls are underage, which is what caused the uproar. But also the video shows Sir Trill keeping to himself and not touching the girls or anything like that,” he added.

Musician Vukani Khoza attested to Given’s claims saying that the girls were all over the age of 16. Therefore, they were not minors. While a child is legally considered to be under the age of 18 in South Africa,the age of consent is 16 years.

“I can also confirm that I booked the hotel and those girls are over the age of 16. We also shot the video in a club and they were allowed in,” said Khoza to Daily Sun.

Next Bafana Bafana on track for 2022 Soccer World Cup spot 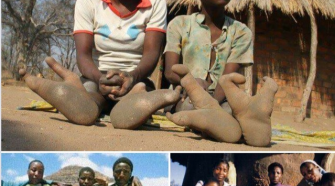 Meet this unique tribe in Africa