The ANC led Enoch Mgijima municipality in the Eastern Cape has revealed how R15 million was spent on a sports stadium. This comes after a massive outcry online at the cost of the Lesseyton sports facility.

Most people seemed unimpressed by the pictures of the stadium and accused the council of having diverted funds from the stadium. The R15 million claim for the stadium even resulted in a twar between One South Africa Movement founder Mmusi Maimane and local DJ Shimza.

After noting that there was a massive outcry over the cost of the stadium, the ANC-run Enoch Mgijima local municipality issued a statement revealing how the R15m was spent. The municipality also shared more photos of the stadium to prove that residents were not shortchanged.

SETTING THE RECORD STRAIGHT ON THE LESSEYTON SPORTS FACILITY

The Enoch Mgijima Local Municipality is aware of concerns from members of the public on social media around the Lesseyton sports facility constructed near Komani. The municipality regrets the manner in which the initial post was shared where minimal detail was provided. Considering the above, we deemed it necessary to provide clarity on the matter as follows:
The construction of the sports facility commenced at the beginning of March 2020 following an Environmental Impact Assessment (EIA) approved by DEDEAT authorising the project within the limits stated in the NEMA Act.

Further investigations were also conducted to determine the suitability of the site to be developed into a sports field with associated structures – which include survey, Geotechnical and Geohydrological tests. The project scope entailed:

The municipality has made this investment in the rural village in support of sport activities in the area. This is aimed at providing the community, especially youth, with a facility that will serve as a suitable playing ground to benefit over six villages. The community has a rich history in sport and has also produced a professional soccer player which the municipality prides itself of.

Next Mohale Motaung Starts A Chapter As A Radio Presenter 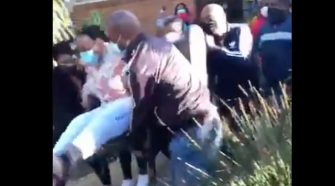